This section contains a variety of Wiederhold family information and references to such information. The focus is on the Wiederhold ancestry, including Stories about ancestors and comprehensive genealogical data collected by Alfred Wiederhold. Where those references lead you to source scans or other Internet sites they will open in a new tab, so you are less likely to get lost. Please report any problems.

The resulting Wiederhold genealogical tree on this website is periodically updated.

Most of the information came from the life work of Alfred Wiederhold. The text within his 12 volumes was professionnaly scanned, and Gio scanned the associated charts. Two versions of the scanned books will be included in the Sources section on this site: the orignal scans and annotated versions, explaining many linkages and cross references.

It is obvious that the Wiederhold ancestry came from Germany. But in early times (here 1300-1400) there was no unified country by that name. Areas in yellow, brown, and green in the map shown here used German as their language, pink areas belonged to the catholic church, and the mauve part belonged to Austria. After the reformation church possessions were taken over by local rulers. The German-speaking areas approximate current Germany, except for area in the south and west, now French (Elsass and Lotharingen), Swiss (Burgund), or Belgian (Brabant). The expansion of Germany to the east, under King Frederick II. the Great of Prussia (1712-1786) had not yet occurred.

The map shows an oval where the earliest Wiederholds lived

A town in the center of that oval was Warburg, and many Wiederholds lived there and in surrounding villages, as Marsberg and Volkmarsen. A map expanding that area is shown on the successor Genealogy page. Note that all the pink areas belonged to the catholic church then.

The earliest comprehensive information I found are the Warburger Stammtafeln (Ancestor Records from Warburg), published in 1986 by the Westfälische Gesellschaft für Genealogie und Familienkunde (Westphalian Society for Genealogy and Family Research). There are two parts: a 191-page book describing individual families and a volume with 294 diagrams. Pages 161-166 of the book and diagrams 285 and 286 are devoted to Wedderhold and Wiederhold. Those eight pages were scanned and are available here. The diagrams (will) also appear in Sources section, with my annotations. Many more pages of the Warburger Stammtafeln were used to trace spouses, in-laws, and their children for prior generations. Alfred had some related information in his charts, but the full Warburg document was not available to him.

The earliest Wiederhold ancestor found, named just Volland, was a Ratsherr (council member), Bürgermeister (mayor), and Justex (judge) 1229-1249 in Marsberg, Westfalen, Germany. The earliest explicit ancestor reference, following a matrilineal line, in that document as of now (Jan.2019) is a Gottschalk von Padberg, listed as an Edelherr (nobleman) in 1144.

Many of the dated entries deal with tithing, as explained in the text pages. Landowners had the right to extract 10% of the harvest, farm animals, or wood from their tenant farmers. Those rights could be split, especially for inheritances. One instance even mentions an eights of a tithing. There is also mention of a Wiederhold splitting a tithing with the local count. For many readers it would be nice to have a translation of the text pages into modern English.(I'd be willing to dictate a rough English translation into a file if there is a volunteer).

Many Wiederhold descendants are still found in this area. Protestant ancestors tend to be to the south, towards Frankfurt, and catholic ones to the east, in the Eichsfeld, a valley north-western Thüringen. In the 19th century travel became easier, making location a less definite aspect of linking generations. But even for emigrants in the U.S., knowing the religion helps when looking for their origin.

As people moved, the spellings of the name could change as well. I document over a dozen alternate names. Since many people were illiterate, Wiederhold's also used coats-of-arms to identify themselves, which was useful when working for a local count or lord.

Warburg itself is a small town in Westfalen, just at the northern border of what is now Hessen.
I found a picture of Warburg taken during the 2018 German Armstrong Siddeley Tour (GAST 2018). Gio and Voy could not participate that year. 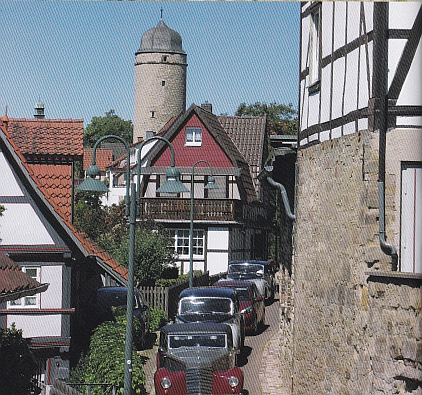 Many Wiederholds emigrated. The name became also common in the Netherlands and in its East-Asian colonies, now Indonesia. Some were employed by the British to find against the American revolutionaries in its American colony and several stayed. In the 19th century many went to the USA and Chile. A large fraction of Wiederholds in the US used the spelling Wetterhold, and Weatherholt or Wetherholt. Those are also included in this genealogy.

A map illustrating boundaries in earlier times is included in the section describing the founding of Hessen.
Some entries from the Warburg Stamtafeln are also related to other entries in the genealogy. Some of them are also listed in the story about the Counts of Hessen, with references to their Wikipedia entries.

back to Wiederhold Family front page This page updated by Gio 31 December 2021.